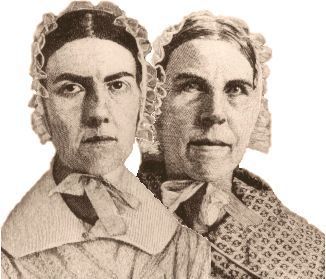 Sisterhood: South Carolina Suffragists is a trilogy of documentaries to commemorate the centennial of the 19th amendment. The first installment “The Grimké Sisters Through the Civil War” premiered in December 2020 on SCETV. “The Rollin Sisters—Reconstruction Through 1895” will be premiere on Thursday, March 18, 2021 at 8:30 p.m., and the final episode “The Pollitzer Sisters—Turn of the Century through 1920” will premiere in May 2021. SC Humanities supported this programming with a Major Grant.

Each program in Sisterhood: South Carolina Suffragists will focus on a different set of South Carolina sisters and their contemporaries who worked to gain equal rights for women. The first program focuses on the Grimké sisters, who became the first nationally-known white American female advocates of abolition of slavery and women’s rights. The second program will feature the Rollin sisters (Frances, Lottie, Louise, Kate, and Florence), politically-engaged black women who were active in women’s suffrage during Reconstruction. The final program will concentrate on Carrie, Mable, and Anita Pollitzer, Jewish women from Charleston who lived to see the 19th amendment ratified. In addition to the three half-hour programs aired on SCETV, educational materials will be created and disseminated to schools.

Thursday, May 20 at 9:30 pm on SCETV
Sisterhood: South Carolina Suffragists: The Pollitzer Sisters—Turn of the Century through 1920

Beryl Dakers, Producer of Sisterhood: South Carolina Suffragists, said: “The impetus for the Sisterhood: SC Suffragists Trilogy came about as we realized that with all the hoopla surrounding the centennial celebration of the passage of the 19th amendment, we heard little to nothing about South Carolina women involved in the long ensuing struggle for women’s suffrage.  We have chosen to spotlight three sets of biological sisters who were all instrumental in different phases of the Suffrage Movement,  but whose achievements are seemingly not well acclaimed today. […]  I believe they were brilliant, sensitive, fearless, well spoken and selfless, imperfect, but truly dedicated advocates for human rights.  They are South Carolinians, and we should claim them and give them their due.”

Using television, radio and the web, SCETV’s mission is to enrich lives by educating children, informing and connecting citizens, celebrating our culture and environment and instilling the joy of learning. Learn more: https://www.scetv.org/.