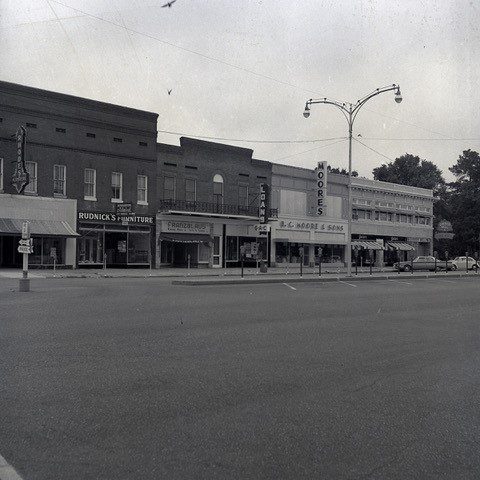 2021 marks the 100th Anniversary of the Charter for the Adath Yeshurun Synagogue in Aiken, SC. They have planned a variety of programs to commemorate this anniversary and to investigate and celebrate the Jewish history of Aiken County. The focus in 2021 will be on a series of virtual programs and resources. SC Humanities supported this project with a Major Grant.

Aiken has a rich and interesting Jewish history. There is evidence of Jewish residents in Aiken as early as the 1850s. Congregation Adath Yeshurun has created a website that tells a comprehensive story of the Aiken Jewish Community through the present and includes profiles of over 40 Jewish Merchant stores in Aiken as well as histories of the major early Aiken Jewish families. www.asourceoflight.org

Additionally, the congregation will be conducting two virtual events in March and April 2021 via Zoom conference that will include highlights from the planned “A Source of Light” exhibit and feature speakers from the community who will share their family stories and personal memories. These sessions are open to the public and everyone is welcomed to participate. 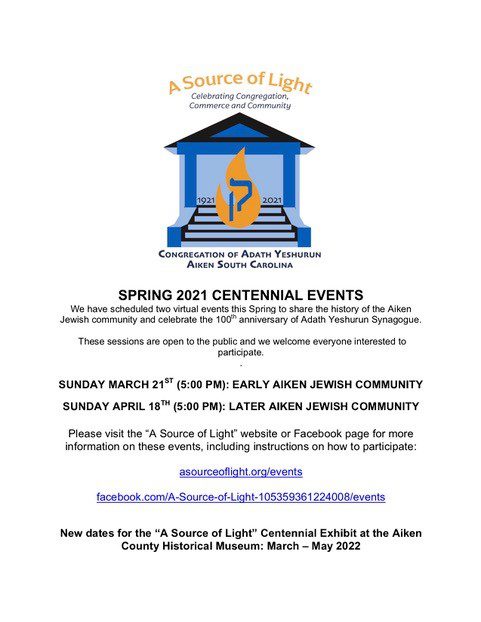 SUNDAY MARCH 21ST, 5:00 – 6:30 PM: EARLY AIKEN JEWISH COMMUNITY
The first virtual event will focus on the early Aiken Jewish community — from the 1850s to the peak of Jewish Merchant activity around 1950. This session will focus on the role of early Aiken Jewish families in establishing this community and in contributing to the commercial growth of the town. Featured speakers are still being finalized but are likely to include Nelson Danish, Stephen Surasky, and Mort Persky. There will be time for Q&A (via chat). More information about this event including a Zoom link to participate is available on the A Source of Light Facebook site: https://www.facebook.com/events/424216995520681

SUNDAY APRIL 18TH, 5:00 – 6:30 PM: LATER AIKEN JEWISH COMMUNITY
The second virtual event will focus on the Aiken Jewish community from the 1950s to today. This session will highlight the contributions made by the Aiken Jewish community to civic life in Aiken & beyond. The session will also trace the changing nature of the Aiken Jewish community as the role of Jewish Merchants declined but was offset by the influx of Jewish engineers at the Savannah River site and more recently by retirees moving to this area. Speakers are still being finalized but are likely to include Morris Rudnick, Doris Baumgarten & Ernie Levinson. There will be time for Q&A (via chat). More information about this event including a Zoom link to participate is available on the A Source of Light Facebook site: https://www.facebook.com/events/179048340264915.

Additionally, the Jewish Historical Society of South Carolina will offer a virtual event on March 7, 2021 (5:30 p.m.) about the role of Jewish Merchants on small town life in the South. The Aiken Jewish community & the pending Centennial celebrations will be highlighted part of this discussion. To register: http://jhssc.org/events/upcoming/.

In person events that were planned as part of the centennial programming have been postponed until 2022. The “A Source of Light” Exhibit at the Aiken County Historical Museum is now planned from March – May of 2022. This exhibit will share the story of the Aiken Jewish community from the mid 1800s to today, with a particular focus on the role and contribution of Jewish Merchants & their families. The exhibit tells this story using archival photos, newspaper articles/advertisements & other artifacts as well as via digital displays that allow a “deeper dive” into family histories and store locations/descriptions. Aiken County Historical Museum

The Centennial Celebration weekend has been rescheduled to March 4-6, 2022. This event will celebrate the past, present & future of the Aiken Jewish community. Activities will include a private viewing of the “A Source of Light” Exhibit as well as panel discussions, walking tours and a Gala dinner honoring members of the community.