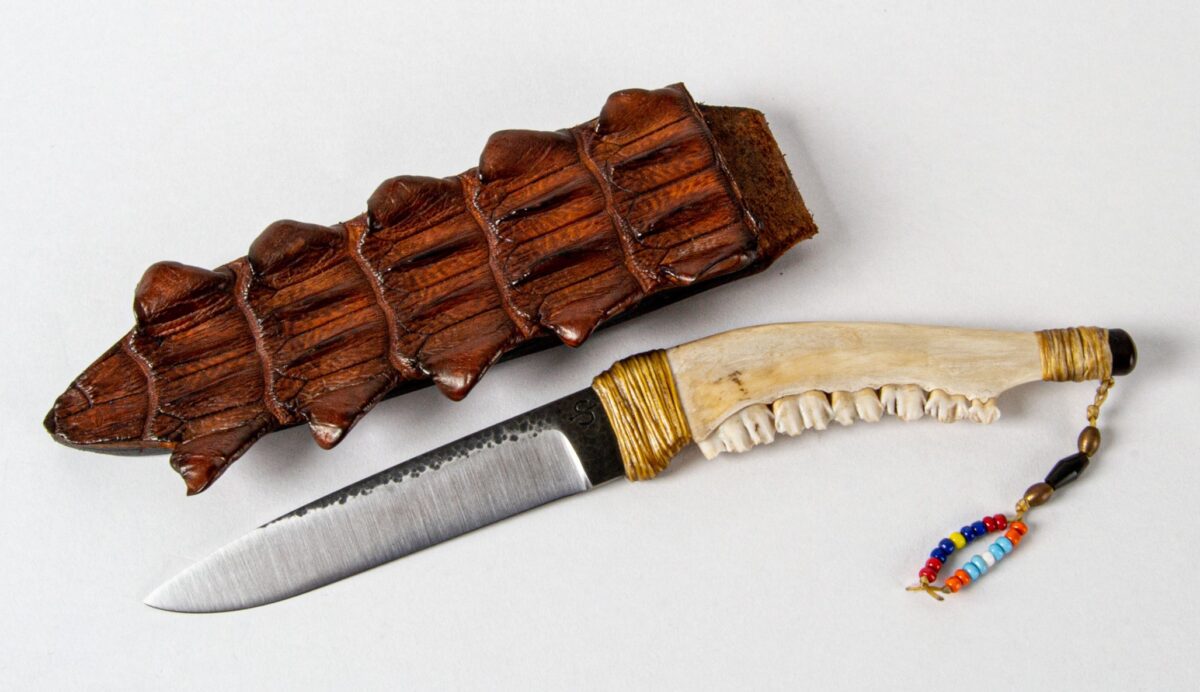 From July 19 to December 20, 2021, McKissick Museum at the University of South Carolina will present Carolina Knives: The Roots of a Revival, an exhibit showcasing over 100 examples of utilitarian and decorative knives by contemporary Carolina knifemakers. SC Humanities supported this exhibit and its associated programming with a Major Grant.

Since the mid-20th century, custom knifemaking has enjoyed a nationwide renaissance. Outdoor enthusiasts, people who hunt and fish, military personnel, and chefs have been inspired to take up making knives for their own and others’ use. The Carolinas proved to be fertile ground for a custom knifemaking revival. The South Carolina Association of Knifemakers got its start in August 1980 at the Third Annual Gun & Knife Show in Aiken. The North Carolina Knifemakers Guild was founded in June 1992.

Carolina Knives: The Roots of a Revival will explore this history as well as presenting a wealth of blade styles and types made by accomplished contemporary custom knifemakers from the Carolinas. The exhibit also will feature select examples of both manufactured and custom-made knives and blades forged outside the southeastern United States and in regions of Africa with strong blacksmithing traditions that informed the history of knives in the Carolinas prior to World War II.

In addition to the exhibit, a series of public programs will be offered over the summer and fall of 2021 featuring lectures, demonstrations, and other interactive activities, starting with an Opening Reception event on Thursday, August 5th, 5:30 – 8:00 p.m. at the McKissick Museum.

Other planned events include:

Thursday, September 23, Time and Place TBD
Fish Deboning Demo with Nic Nichols
North Carolina chef-turned knifemaker Nic Nichols will demonstrate how to descale and debone a fish and discuss how fish are prepared and eaten in various cultural communities.

Saturday, October 2, 11am-3pm at McKissick Museum
Meet the Makers and Community Knife Sharpening Event
Bladesmiths from North Carolina and South Carolina whose work is featured in Carolina Knives: The Roots of a Revival will gather throughout the day to talk with each other and visitors about the contemporary custom knifemaking movement. Simultaneously, Kyle George–the grandson of George Herron—considered the grandfather of the knifemaking revival in the Carolinas–will host a community knife sharpening event. Visitors are invited to bring a knife or two—perhaps those they plan to use at Thanksgiving—and see how it is transformed by the use of a grinder or try their hand at more humble methods of knife sharpening they can use at home.

Tuesday, November 9, 2021, 5:30-7pm at McKissick Museum
Cherokee Knifemakers Share Their Stories
To celebrate Native American History Month in November, McKissick Museum has invited Cherokee knifemakers Taylor Putman of North Carolina and Alabama-born KJ Jones. Self-described history nerd, Putman will share what his grandfather told him about war clubs and discuss how he came to specialize in restoring vintage hachets. KJ will tell the story of how she came to be part of a traveling “wild west” show as a trick knife thrower.

Saturday, December 11, 4-5pm, at Craft Axe Throwing, 700 Gervais Street, B2, Columbia SC
Knife Throwing with Jean Laney Harris Folk Heritage Award Recipient Bobby Branton
Join us for a conversation about how Craft Axe Throwing got its start and how Jean Laney Harris Folk Heritage Award recipient, knifemaker Bobby Branton of Awendaw, SC, came to knife throwing as a sport. In 2004 Mr. Branton was recognized as the “Knife Thrower of the Year” and ten years later received the “Lifetime Achievement Award” from the International Knife Throwers Hall of Fame. Watch Branton in action and be inspired to give axe throwing a try!

2021 Governor’s Awards in the Humanities Announced