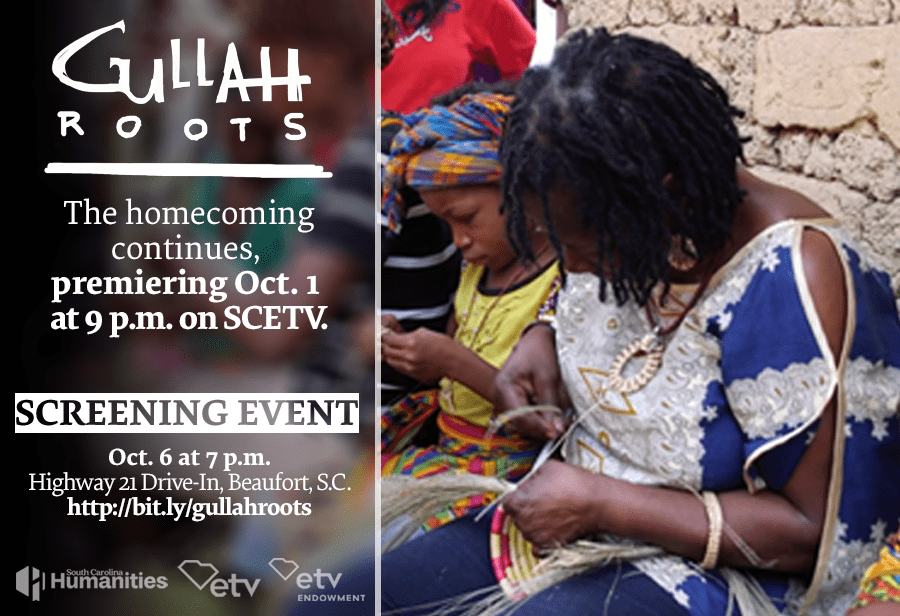 South Carolina ETV (SCETV) will be premiering a new hour-long documentary film on Thursday, October 1 entitled Gullah Roots. Following leaders of the South Carolina and Georgia Gullah Geechee community as they experience a homecoming in Sierra Leone, the project will debut at 9 p.m. on SCETV. SC Humanities helped support this project with a Major Grant.

The trip to Sierra Leone took place last winter and included Gullah Geechee scholars, performers and cultural ambassadors, such as Anita Singleton Prather, also known as Aunt Pearlie Sue of the Gullah Kinfolk, and Ron and Natalie Daise, as well as Victoria Smalls, a commissioner of the Gullah Geechee Cultural Heritage Corridor. While touring the country, members of the group noted powerful connections between Sierra Leone and the Gullah Geechee people. For example, in one village, Nakia Wigfall, director of the Sweetgrass Cultural Arts Preservation Society, sewed a sweetgrass basket with a local basket maker.

Part of SCETV’s Carolina Stories series, Gullah Roots dives deep into South Carolina’s ties with West Africa, educating viewers about Gullah heritage, including spiritual, musical and artistic traditions. A sequel to SCETV’s 1990 documentary Family Across the Sea, this project was produced by Betsy Newman and Xavier Blake, and directed, written and edited by Newman. The film aims to raise awareness about the Gullah Geechee community and its ties to West Africa. It also examines the challenges many in that community face today and the progress they have made since the first homecoming to Sierra Leone 30 years ago.

In addition to its premiere on Oct. 1, Gullah Roots will also be airing on Sunday, Oct. 4 at 2 p.m. on ETV World and Monday, Oct. 5 at 8 p.m. on the South Carolina Channel. To celebrate the debut of this project, SCETV and the ETV Endowment of South Carolina will be hosting a film screening event on Tuesday, Oct. 6 at 7 p.m. at the Highway 21 Drive-In, located at 55 Parker Drive in Beaufort, S.C. The event is open to the public. Additional information and a registration link can be found on Eventbrite by clicking here.