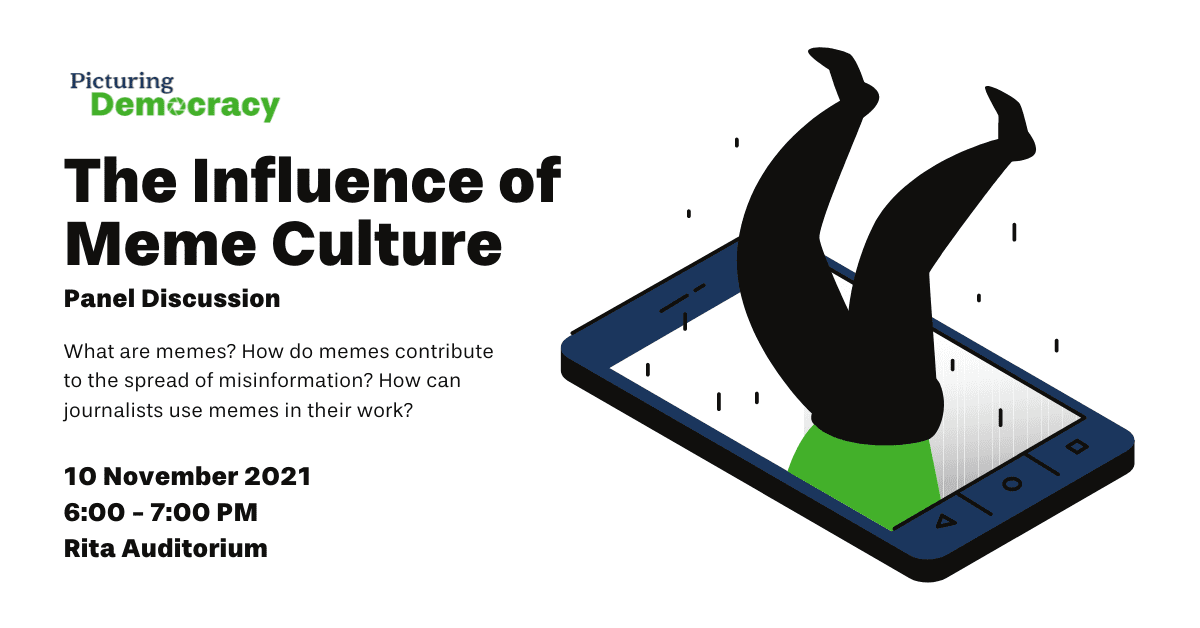 South Carolina Humanities and the College of Charleston School of Humanities and Social Sciences are pleased to present “Picturing Democracy,” a series of public programs designed to encourage critical thinking about the role of imagery in American democracy. The final event in the series will be a panel discussion about “The Influence of Meme Culture” featuring moderator Christian Senger and panelists Ryan Milner, Abby Ohlheiser, and Emory Parker at the College of Charleston Rita Auditorium at 6:00 p.m. on Wednesday, November 10th. The program will be free and open to the public but registration is required. The panel aims to address the influence of meme culture on news and journalism. What are memes? How do memes contribute to the spread of misinformation? How can journalists use memes in their work?

Christian Senger is the man behind Holy City Sinner, the most popular local blog in Charleston. For the last eight years, the residents of the city have voted the website and its Twitter feed as the best in Charleston. Created in August 2011, Holy City Sinner celebrates the many sides of the historic and lively city of Charleston. From local news aggregation, helpful resources, and interviews to event listings, celebrity sightings, and party previews, the blog serves as a hub for the city’s day-to-day happenings. As evidence of the blog’s reliability and popularity, Senger has been featured in USA Today, Southern Living, the Post & Courier, and Skirt! Magazine. He is also a weekly guest on ABC News 4 and makes regular appearances on Fox 24’s Fox News Now. In addition, he has appeared on the BBC and BBC Radio, Live 5 News, Kickin 92.5, Lowcountry Live, 105.5 The Bridge, Quintin’s Close-Ups, and Mix 95.9. In 2016, Senger was named one of Charleston’s “Best & Brightest,” by the Cystic Fibrosis Foundation of South Carolina. The program honors the “Lowcountry’s finest young professionals who exemplify strong leadership qualities, are active in their community and have excelled in their chosen professions.”

Ryan M. Milner is the chair of the Department of Communication at the College of Charleston. He studies internet culture, which means he studies everything from funny GIFs to Twitter debates to large scale propaganda campaigns. Across this work, he examines how online interaction matters socially, politically, and culturally. He’s the author and co-author of three books: The World Made Meme: Public Conversations and Participatory Media, The Ambivalent Internet: Mischief, Oddity, and Antagonism Online,and You Are Here: A Field Guide to Navigating Polarized Speech, Conspiracy Theories, and Our Polluted Media Landscape. Ryan has also contributed commentary to outlets like TIME, Slate, the Los Angeles Review of Books, NBC News, and the New York Times.

Abby Ohlheiser is a senior editor at MIT Technology Review, where they cover digital culture. Previously, they covered the same beat for The Washington Post. Digital culture is a pretty wide-reaching beat, but Abby’s work over the years has focused on a few lanes: misinformation and online extremism, creator culture, and the impact of platforms and algorithms on people’s lives and communities. Their current reporting interests include internet culture and aging, and online culture in religious spaces. Abby lives in Baltimore.

Emory Parker is the data project manager at STAT. He joined STAT in 2021 after working as a digital editor and data journalist in Charleston, S.C. In 2015, he was part of the team that won the Pulitzer Prize for Public Service for a series on South Carolina’s epidemic of criminal domestic violence. Prior to working in journalism, he worked in a neuroscience lab at the Medical University of South Carolina. Emory received a degree in biology from the College of Charleston.

The School of Humanities and Social Sciences (HSS) is the largest of the academic schools at the College of Charleston with close to 160 full-time faculty members. HSS’s popular and inspiring majors place a strong emphasis on the value of written expression and collaborative research, while preparing students to function as responsible, independent world citizens and engaged, lifelong learners. The core departments in HSS include communication, English, history, philosophy, political science, psychology, religious studies, and sociology and anthropology. HSS faculty also direct the urban studies, general studies, and women’s and gender studies programs as well as many of the College’s interdisciplinary minor programs. Visit hss.cofc.edu to learn more.

The mission of SC Humanities is to enrich the cultural and intellectual lives of all South Carolinians. Established in 1973, this 501(c) 3 organization is governed by a volunteer Board of Directors comprised of community leaders from throughout the state. It presents and/or supports literary initiatives, lectures, exhibits, festivals, publications, oral history projects, videos and other humanities-based experiences that directly or indirectly reach more than 250,000 citizens annually. Visit www.schumanities.org for more information.

Jail, No Bail: How 30 Days Impacted the Civil Rights Movement

When There Is No Frontier – Exhibit and Programs